Have you ever had to deal with SIP and NAT issues? How many times you or your customers were frustrated by one way audio? How much time have you spent debugging such cases?

It is not a simple problem, and there were many attempts to deal with NAT in SIP and other media signalling protocols that are using offer/answer model. Some of them are server centric, others are implemented on the client side and a few of them use mix of server and client implementation. Lets review some of them.

Universal Plug-and-Play. UPnP allows client to control router/firewall. This is something that not widely supported by SIP phones. Besides, there are security risks, plus UPnP requires strict and clean network conditions, which are typically rare.

SIP ALG. Application-Level Gateway was developed to be used in routers to inspect VoIP traffic, and help in passing it back and forth. Unfortunately many ALG implementations are broken by default.

SBC. Session Border Controllers have many different approaches for handling NAT. While very useful in general, they offer little help for users that are outside of company network and behind some public not controlled NAT's and firewalls.

STUN. Session Traversal Utilities for NAT is a network protocol which in a nutshell is like "What's my IP" service. STUN server sits somewhere in public internet, waits for incoming requests, examines packet source IP and port, packs this information as STUN response, and replies to the request with the information it discovered. This way clients behind NAT are able to find out about their public ipaddress/port pair and use that when they need to pass this to remote peer in order to receive audio on that IP/port pair. While this works in the majority of cases, STUN can't deal with Symmetric NAT.

We will further focus on STUN and TURN - here is the summary:

Knowing the pros and cons of both protocols, we might think: "Wouldn't that be cool, if we can somehow combine STUN and TURN servers, so we could establish media sessions inside of local network when it' is possible, penetrate NAT using STUN, and use TURN for cases where both previous options have failed?" This is what ICE is all about.

Interactive Connectivity Establishment (ICE) is a technique for NAT traversal that allows to intelligently define the most feasible media path between two media endpoints. An ICE agent is any ICE capable endpoint. ICE agent gathers information of all possible network connections (ipaddress/port pairs) it can discover on local interfaces, as well as by using available STUN and/or TURN servers. Each such pair is called a "candidate". Once endpoint gathered all available candidates, it will send this information to remote peer in SDP body within INVITE request or response. When each peer has the local and remote candidates they create local and remote candidate pairs and order them by priority (lower number means higher priority)

After candidates are paired and ordered, ICE agent starts procedure called "connectivity checks". This procedure sends special requests to each remote candidate, in order described above until a response is received for one of these requests. Once a response is received that candidate pair is nominated to be used for media stream. This is very simplified explanation of the ICE process with many technical details skipped. You can learn more about ICE in RFC 5245 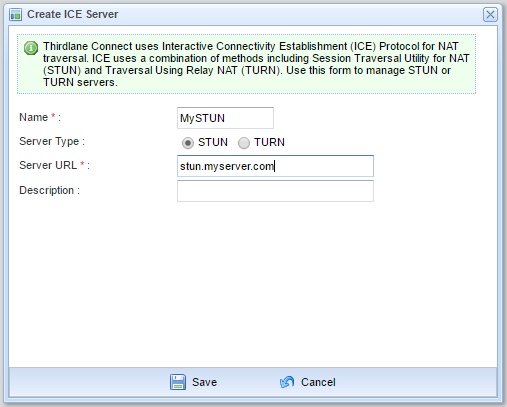 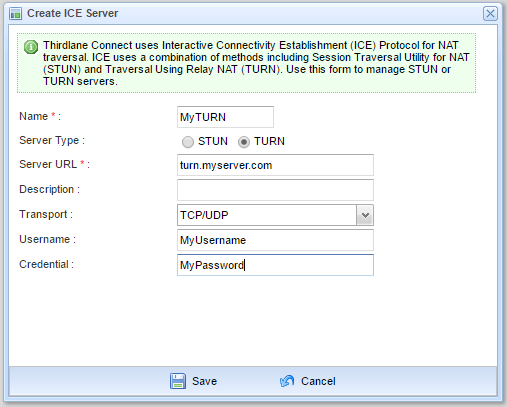 After this, you need to enable your ICE server(-s) on ICE settings tab of Edit User Extension window. 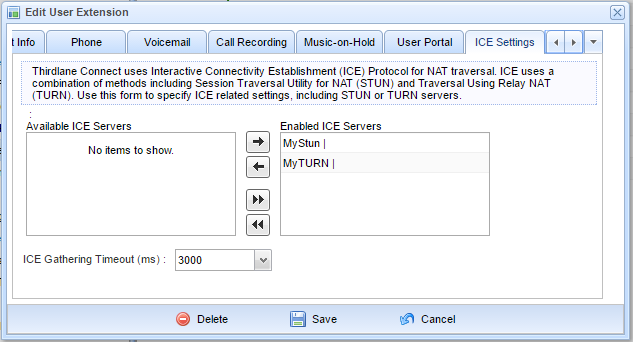 In order to apply ICE server settings, all active Thirdlane Connect clients have to be be restarted by logging out and back in.

Note that Thirdlane Connect will use publicly available Google’s STUN servers if you don't specify any.

Options for ICE support - where to get your STUN and TURN servers:

In the follow up post we will explain how to build and configure your own STUN and TURN server - check back soon!