This section allows you to manage Dialplan Scripts - named groups of dialplan commands that allow you to use Configuration Manager to "define" the dialplan rules used when processing calls.

Configuration Manager ships with many useful scripts which users can clone and modify as needed. Users can also create their own scripts to extend PBX functionality.

Scripts shipped with Configuration Manager are protected and cannot be modified or deleted.

Select scripts that can be used for allows you to limit listed scripts to the scripts that are intended for use in Inbound Routes, User Extensions, Feature Codes, etc. 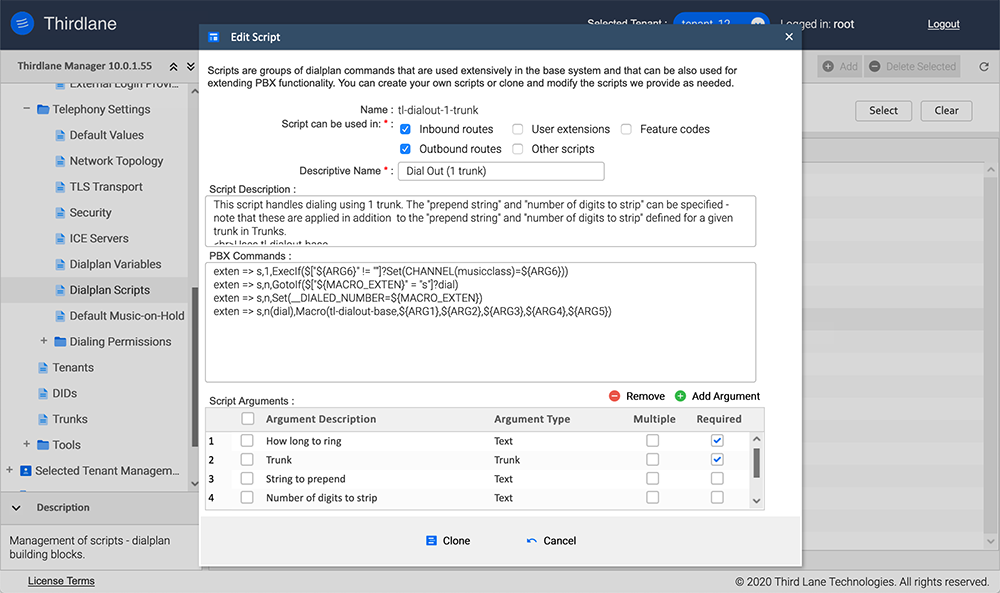 Name. Alphanumeric name of the script, no spaces allowed. We recommend you use a common prefix for your scripts. Thirdlane scripts shipped with Configuration Manager start with tl- prefix, you should not use this prefix for your own scripts.

Script can be used for:. Select, by checking the checkbox, of each category that is appropriate for this script. This will determine whether the script will be presented as an option when creating Inbound Routes, Uutbound Routes, Feature Codes, etc.

Descriptive name. Short user friendly name of the script that will be shown while assigning this script to User Extensions, Feature Codes, etc.

PBX Commands. Asterisk commands that will be run when this script is executed. Asterisk rules for macros apply, so scripts arguments will be referred to as ${ARG1}, ${ARG2}, etc.

Script Arguments. You can add script arguments by clicking Add Argument button. The information you specify here will be shown and used when scripts are referenced in the configuration of Inbound or Outbound Routes, User Extensions, Feature Codes, etc. To delete a script argument, click the Remove button.

Type. Select from the list of argument types. Most of the types will result in the list of existing objects of this type (Phones, User Extensions, Mailboxes, Hunt Lists, Queues, etc.) to be presented when the script is referenced in Communication Manager. To allow any value to be simply entered when using the script, select the Text type.

Multiple. Specifies whether more than one value is allowed for the argument.

Required. Specifies whether the argument is required or optional.